While we are terrible at keeping up with this blog, we have been religiously recording our experience in this little book. 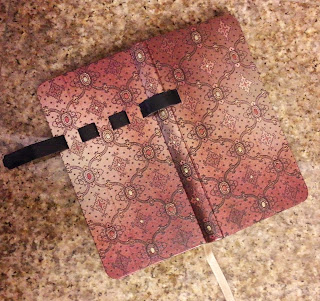 When we’re in the midst of the episodes we share with you here, it is sometimes hard to find the humor in the situation.  However, re-reading it a year later, after the wounds have healed (both mental and physical), we can laugh.  That’s a good thing.
Now, let’s recap the summer of 2012.  The four of us began the trip full of optimism and hope.  Armed with a plan.  A dry well was not part of our plan.  That took our energy, knocked us down, kicked us a little bit…we wish it would have spit on us too.  That would have been somewhat like a shower that we hoped to take.  Eventually got it licked and began our project in earnest.  One of the first things we did was go to visit Renae’s family.  They were downsizing and offered us the majority of the furniture and odds and ends in their home.  We trucked the goodies back to our place and used the furniture to make our living quarters more comfortable.  There was also a pumpkin bread kit that we made up after a particularly grueling day.  The smell of pumpkin bread baking can fix anything.


Unfortunately, Dennis was only with us for a week so all he got to work on was the well.  Actually, that’s not completely true, he also had time to improve our household situation.  One night after we discovered that a Damp-Rid container in our pantry would have been a good idea, he helped make garlic bread by sawing the top and bottom off the garlic powder container and grating the brick that it had become back into a powder. You can call us crazy, but you can’t call us quitters.
Chip, Renae and I got to work on finishing the double cabin the second week in.  We insulated the floor and laid a new sub-floor while the three of us were there.  After Renae and I went home, Chip finished the drywall, applied texture to the walls and ceiling, painted, laid the slate in the kitchen and bath, installed and finished the wood flooring, made a vanity and kitchen cabinet.  By himself.


We had a tough row to hoe in the summer of 2012, but when we look back at all that was accomplished in spite of the initial stumbles, it turned out OK.  This upcoming weekend we’re getting together to sketch out our plan for the summer of 2013.  I know what you’re thinking: “We read this blog.  Why bother with a plan?”  The Cynical Sally in us sometimes feels the same way, then we come back to the old adage, “Fail to Plan, Plan to Fail.”  In our case, it should probably be “Make a Plan, Plan to Make Significant Adjustments.”

The Embers Team
We are kicking the corporate bucket to make a better life for ourselves. Our family wanted to take this opportunity (before we got too old and set in our ways) to strike out on our own and live our life for US.